Customers want reassurance, not a return to normality

Despite many coronavirus lockdowns easing around the globe, consumers remain anxious and seek reassurance from brands.

In a time of crisis, it’s understandable that predictions about the not-too-distant future are in high demand.

In the case of the coronavirus pandemic, there are at least two trends we can predict with some level of certainty: a large percentage of the populous continuing to work from home after lockdowns ease, and the likelihood of an economic recession.

In a recent Dynata report, over 11,000 people from 11 different countries were interviewed to establish that roughly three-quarters expected a shift to permanently remote working as a result of the virus.

Conversely, the World Economic Forum has repeatedly stated it anticipates a global economic recession in the aftermath of COVID-19.

Beyond these two expectations, how much do we know? In the words of renowned mathematician John Allen Paulos, the only certainty is uncertainty.

For instance, the general consensus is that online shopping is now the go-to medium for the majority of consumers, regardless of their demographic and how much lockdowns have been eased.

A CommerceHub study found that the percentage of people shopping for essential items online as a result of the crisis had risen from 43% to 68%.

Perhaps more pertinently, 49% of respondents over the age of 50 who did not shop online said they’re likely to subscribe to a delivery service following the COVID-19 pandemic.

Yet, when the UK reopened some ‘non-essential’ retail stores to the general public on 1st June, the public raced to them in their droves, with queues for large outlets such as IKEA stretching for miles.

Elsewhere, the widely predicted evolution to being a cashless society seems to have been accelerated, with ‘high tech, low touch’ being touted as the ‘new normal’ around the globe.

Yet this is ignoring the fact that millions of people don’t have easy access to internet banking and continue to rely on cash for making daily, necessary purchases. In many instances, consumers have been forced to queue at banks to undertake cash transactions; creating a feeling of heightened anxiety at a time when those more fortunate were able to stay indoors.

A sense of heightened anxiety is one consumer trend that continues to reside, despite lockdowns easing around the globe.

In Delineate’s 15th June research report, Unlocking change: How consumer behaviours in lockdown are evolving, it found that anxiety remained the overriding emotion when consumers were asked how they felt during the lockdown period.

This sense of anxiety may slowly be easing off, according to Delineate’s data, but it doesn’t disguise the fact that as lockdown restrictions are lifted, many people are looking to brands to make them feel reassured; and value reassurance over any guarantee of a return to normality.

Indeed, the images of the public confidently racing back to shopping outlets in hoards may well prove to be a blip –  according to a recent Blackhawk Network consumer study, close to half (44%) of customers said they will need specific reassurances before they return to non-essential businesses in retail and hospitality, and 39% said they weren’t comfortable returning at all. The most important consideration was social distancing – with 47% of consumers looking for this as a specific reassurance.

In Ipsos MORI’s recent state-of-the-nation report, very few consumers declared they were happy for a return to normality, on a range of factors.

Just two in ten people say they would be comfortable holidaying abroad, whilst even the prospect of bars and restaurants reopening was not enough for people to feel like they’d wish to return to ‘normal’. 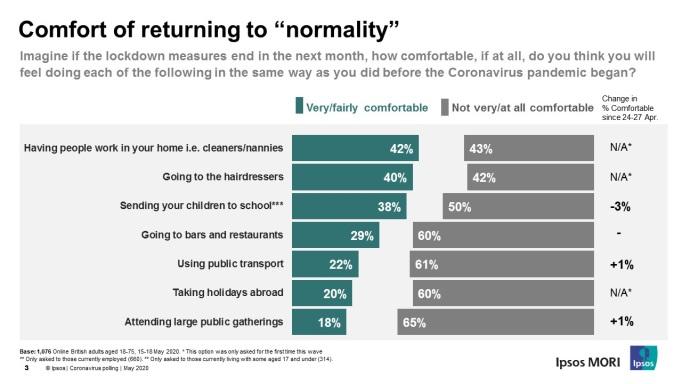 In the US, the response by brands has been to try and entice consumers back to normality by slashing prices and providing a range of price cuts. According to Travel Age West, this has been particularly evident in the aviation industry, yet consumers remain unconvinced.

In a June survey by PhocusWire, travel deals such as cheap airfare were only appealing to 31% of U.S. travellers, while 42% of U.S. travellers will not be taking advantage of such discounts with only 27% saying they’d consider it.

“Tourism has been hard-hit by the COVID-19 pandemic, and businesses (including airlines) are scrambling to offer heavily discounted fares for travellers,” says Valerie Chen, deputy digital editor at Travel Age West.

“However, with no clear end in sight for the crisis, consumers are still hesitant to book trips. No longer enticed by discounts, they are looking to health experts and government agencies for reassurance instead.”

Reassurance may well be something that starts with government communication, but it is also something brands must learn to communicate in the coming weeks and months, as the COVID-19 situation evolves.

Keith Brannan, chief marketing officer for finance provider Kasasa says this is where marketing and CX budgets may be necessary, despite the crisis seemingly putting a freeze on many outbound costs.

“43% of consumers told us they found it reassuring to hear from brands they know and trust during this uncertain time,” Brannan states.

“To be reassuring, you must be visible. It might feel counter-intuitive since many businesses have an impulse to cut costs during a crisis and media spends are usually the first on the chopping block, but times of uncertainty are exactly when you should ramp up your marketing.

“Consumers are in front of a computer all day now. If you disappear now, [they’ll] see you as the small institution that disappeared when things got hard…now is even the time to expand your reach. Because reassurance messaging is brand-focused rather than product-focused, it’s the perfect type of messaging to start building brand awareness in new areas, whether that’s regionally or nationally.”

One very recent example of this type of messaging is John Lewis, which has gone out of its way to highlight the features it has introduced to its stores in order to provide a safe experience for returning customers.

Stephen Choonos, head of research at Blackhawk Network also believes brands need to be listening more intently to what their customers are saying at this time, and be more proactive in response to customer feedback.

“Not surprisingly, we’ve seen from our research that the safety measures businesses have in place are top of consumers’ minds when deciding how and when they return to various settings and begin physical interactions.

“Until social distancing is no longer part of our daily lives, how successfully these measures are implemented in the eyes of customers will be an important contributor to business recovery. The customer experience basics of listening to customers, understanding their experiences and acting on this feedback remain as important as ever during this period.”

Indeed, in Blackhawk’s consumer study, only 18% of consumers had seen a company proactively get in touch with some form of gesture for them during lockdown, highlighting that expectations are not being met.  And with Delineate’s Unlocking change study also highlighting that consumers trust certain brands to communicate pandemic updates with them more than they trust their own government to do so, the onus is on for brands to find ways of doing so, and presenting reassurance based on facts rather than predictions or seemingly unknown ‘new normals’.

As Delineate’s chief research officer, Tarcey Hubbard states:  “As consumers start to put their masks on, brands need to take theirs off (virtually of course!). Our data shows that lockdown has not affected everybody in the same way… but it has affected everybody. If ever there was a time to have a real conversation with consumers, it is now: consumers need to know who they can trust in order to feel confident going out again.”

find out more about us